US President joked he is too old to play football. 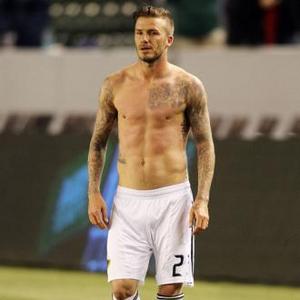 The 50-year-old US President admitted that he thinks the 38-year-old soccer player is getting too old to play the sport professionally.

Speaking at the White House in Washington D.C on Tuesday (15.05.12) he said the 38-year-old Los Angeles Galaxy player could be a father to some of his teammates.

He joked: ''We have a young up-and-comer on the team, a guy named David Beckham. I have to say I gave David a hard time--I said half his teammates could be his kids. We're getting old, David. Although you're holding up better than me.''

The American leader was acknowledging the team's third Major League Soccer Cup and labeled him ''tough'' despite some recent setbacks including a fractured spine and injured hamstring before the championship game.

Obama added: ''In fact, it is a rare man who can be that tough on the field and also have his own line of underwear. David Beckham is that man.''

David has an eponymous bodywear line for fashion store H&M.