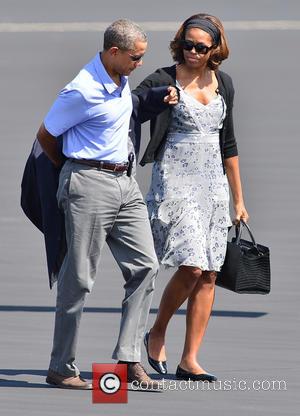 America's leader President Barack Obama and one of his predecessors Bill Clinton have joined the authors and celebrities around the world paying tribute to Colombian author Gabriel Garcia Marquez, who died on Thursday (17Apr14).

The One Hundred Days of Solitude writer, a Nobel Prize winner, died in Mexico City, aged 87, and the literary world is mourning his passing, but political leaders have also released statements honouring Marquez.

Obama writes, "With the passing of Gabriel Garcia Marquez, the world has lost one of its greatest visionary writers - and one of my favorites from the time I was young... I offer my thoughts to his family and friends, whom I hope take solace in the fact that Gabo's work will live on for generations to come."

And Clinton, who previously called the author his "literary hero" adds, "From the time I read One Hundred Years of Solitude more than 40 years ago, I was always amazed by his unique gifts of imagination, clarity of thought, and emotional honesty... I was honored to be his friend and to know his great heart and brilliant mind for more than 20 years."

Meanwhile Colombian President Juan Manuel Santos offers, "A thousand years of loneliness and sadness for the death of the greatest Colombian of all time!"