Outspoken Rapper Azealia Banks Has Sworn Off Media Interviews For The Rest Of 2015 After Blasting Billboard Magazine Editors For Taking A Recent Conversation "Out Of Context". 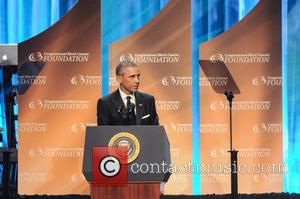 The Chasing Time star faced a backlash online last week (ends03Apr15) when her cover story for Billboard was published. In it she discussed her frequent Twitter rants, her controversial views on reparations for slavery, and her desire to sleep with U.S. President Barack Obama.

She said of the world leader, "He's so fine. Those big-a** white teeth and ears hanging off his head? I'm like, 'Oh my God, I want to f**k the President.'"

Her comments went viral, prompting Banks to clarify her remarks on Twitter on Friday (03Apr15), insisting the quotes were made in jest and were never meant to feature in the article.

She tweeted, "Omg (oh my God) I was totally just joking and being silly in billboard about the prez (president) I wasn't actually being forreal (sic). Here's to hoping they put some of the really insightful things I said in and not just the jokes."

However, upon reading the full piece, Banks has decided she will no longer be speaking to the press

Taking to Instagram.com this week (begs06Apr15), she writes, "This interview was not my favorite. Lots of things I said got taken out of context. This whole interview was mostly about a few raunchy jokes I made.... when I really spoke about so much more.