Banksy continues to taunt the authorities.

The Banksy piece, which was surprisingly revealed on the side of a New York building recently, is now being protected by a team of guards. The woman, whose wall the artwork ended up on, is protecting it much like a museum piece, with 24/7 armed guards, plexiglass and a rolling metal gate. 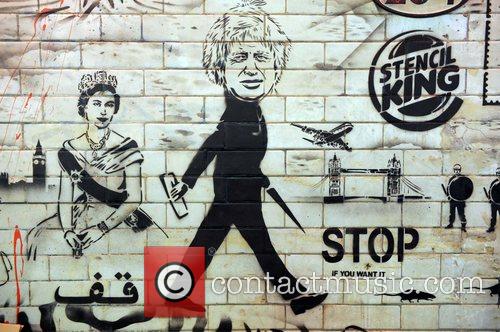 The landlord hasn’t yet decided what to do with the piece, but her initial instinct was just to protect the mural for the public.

“We still haven’t 100 percent decided what to do,” Cara Tabachnick, whose family owns the five-story building that is home to a storefront and apartments, said for the New York Post. “But we do have the instinct — and are trying — to preserve it for the public so it can be viewed and enjoyed, and not destroyed in any way.”

The mural carries a Japanese theme, depicting two geishas and a bonsai tree. So far, it is one of the few Banksy pieces that hasn’t yet been defaced by vandals, but Banksy has other problems besides a few haters.

The New York authorities also have their sights set on the elusive street artist. When the British graffiti artist revealed his latest two paintings, displayed in a museum-like setting in the city’s West 24th Street, the police continue the search for his real identity over accusations of defacing public property. Meanwhile, Banksy used a third-party company to arrange a rather elaborate setting for his work – there is a bench opposite the paintings, as well as hired security guards, carpeting, and “some refreshments,” as per the “exhibit’s” advertisement.

“Are you the sort of person who enjoys going to art galleries, but wished they had more gravel in them?” the ad reads. “Then this temporary exhibition space is for you. Housing just two paintings but also featuring a bench, some carpet and complimentary refreshments. Opens today through Sunday 11am til midnight.”

Mayor Michael Bloomberg has come out with the statement that Banksy’s acts across the city should not be tolerated. Mayor Bloomberg is not a fan.