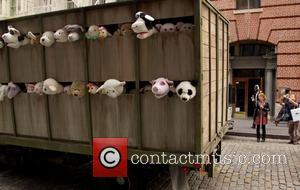 Graffiti artist Banksy has caused a storm of outrage in the U.S. by criticising the design of New York's newly-built World Trade Center, declaring: "The terrorists won."

He writes, "It would be easy to view One World Trade Centre as a betrayal of everyone who lost their lives on September 11th, because it so clearly proclaims the terrorists won.

"You currently have under construction a one thousand foot tall sign that reads - New York - we lost our nerve.

"The attacks of September 11th were an attack on all of us and we will live our lives in their shadow. But it's also how we react to adversity that defines us. And the response? 104 floors of compromise?"

The piece, which was originally written as an editorial for the New York Times before it was rejected by editors, has angered many of those whose loved ones perished in the attacks.

Banksy had already angered many families of the 9/11 victims by his sketch Twin Towers in Tribeca, a wall stencil of the Twin Towers with an orange flower depicting the explosion caused by the airplane smashing into the complex.