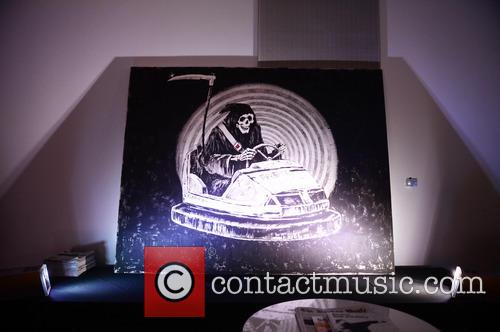 ‘All the timber and fixtures from Dismaland are being sent to the ‘jungle’ refugee camp near Calais to build shelters,’ Banksy announced on his Dismaland website. ‘No online tickets will be available.’

The announcement was accompanied by a picture of the migrant camp, known as ‘The Jungle’, with a picture of the Dismaland castle (a burnt out version of the classic Disney castle) superimposed on it.

It is uncertain how many people are living in ‘The Jungle’ but, according to reports in the Guardian, it may be anything up to 5000. They are primarily living in tents or in temporary shelters without basic sanitation.

Banksy’s Dismaland opened in Weston-super-Mare in August. Thousands queued for the privilege of seeing Banksy’s work and that of the other artists he had hand-picked from across the globe. Many of the pieces were considered controversial with one depicting migrant boats and another referencing Jimmy Savile. Another of Cinderella shown tumbling out of her upturned carriage as paparazzi took photographs also received criticism as it was reminiscent of the death of Princess Diana.