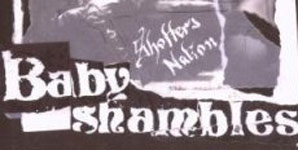 Without meaning to bore anyone more than is necessary - after all, the tabloids have done a good enough job as it is documenting the drug-fuelled excesses of Pete Doherty - 'Shotter's Nation' is the record that nearly wasn't. Interrupted by countless arrests, spells in rehab and court cases, not to mention the other overwritten about segment of Doherty - his love life - this album doesn't really have any right to have seen the light of day let alone be any good.

So it is perhaps surprising that all things considered, 'Shotter's Nation' isn't a bad record. By "not bad", it at least manages to sound like a structured collection of songs rather than a ramshackle mish-mash of old demos like its predecessor. Even more noticeable is the fact that its creators actually appear to have learned to play their instruments - a little unfair some may say, but you try and listen to more than three consecutive songs off 'Down In Albion' without once grinding your teeth if you dare.

Unfortunately, as is often the case, a new found skill for musicianship does not always carry with it an ear for a tune, and although there is a more ebullient flow to the majority of 'Shotter's Nation', a lot of its contents are less than memorable at best.

A lot of that maybe down to the production. The any-old-how let's get it over and done with and go down the pub mentality of Mick Jones has been replaced by the all-too polished (for this lot anyway), clean cut precision of Stephen Street, and while this highlights the aforementioned improvement in musical proficiency it also makes the distinct lack of interesting songs stand out a mile too.

Former beau Kate Moss has co-writing on four songs here, and each one is as instantly forgettable as the last.

When Doherty does come into his own is when he forgets the mythical romanticism that's surreptitiously surrounded his every move in favour of a vitriolic fervour not seen since his 'Up The Bracket' days, as on the opening 'Carry On Up The Morning' or album highlight 'UnBiloTitled', admittedly a re-recording of an old song but still a timely reminder of his talents all the same.

The rest? Competent as it is, doesn't really summon up much more than a non-plussed shrug of the shoulders. Average then, rather than dangerous or even diabolical.