Babyshambles - Down In Albion Album Review

Review of Down In Albion Album by Babyshambles 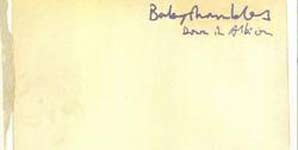 Have you ever heard the saying; "Tell the joke on yourself, before others take pride in doing it"? Well check out these lines sung by a reflective and laid back Pete Doherty in the opening number 'La Belle Et Le Bete';

"I'll tell you a story, but you won't listen.
It's the story of a coked up pansy;
spends his night in flights of fancy."

This shows Babyshambles on a mission, with the music being toned down to make way for the poet to shine and tell of a sordid and downtrodden tale. The bluesy and woe releasing 'The 32nd of December' is one of the songs penned solely by Pete Doherty and is quite jazzy instrumentally to juxtapose his moody rambling vocal style that is both longing and gripping. 'Stick and Stones' puts a bit of ska into the musical blender, with weary vocals punctuated by some timely whistling to aid a woe begotten tale about the power of the spoken word.

The defiant nature of the outfit comes out in the previous top ten single; 'Kilamangiro' that glosses this turbulent sixteen track collection of poetic thoughts and reflections. 'Down In Albion' has deliberately been put together to sound almost like a jam at times. This gives off a raw and uncompromising feel, with tit bits of Doherty's eccentricity oozing out, like his brief nursery rhyme intro to '8 Dead Boys', before it unfolds into the rockiest and most brazen piece on show. Diversity is proffered in the guest track; 'Pentonvile' that is a reggae fuelled foray into the unknown, performed by General Santana who Pete became acquainted with on his stay in Pentonvile Prison, by all accounts.

'What Katy Did Next' throws a musical crust to starving The Libertines fans and will surely spark rumours that Pete's part in that group will soon no longer be but a memory. The acoustic sparked new single 'Albion' is a piece of crisp musicianship that rides slowly with Pete's softer and more soothing vocal style, oozing sincerity and helps keep the album going nicely. 'Down In Albion' on the whole, is a big disappointment for the many critics who wanted it to be tripe and were relishing the sight of the group floundering. Sorry, maybe next time you cynical sourpusses.