Talking about ethnomusicology at Contact Towers one afternoon as we do, we remembered the famous words of Meyer when he spoke about the common, cross cultural threads in different styles of composition: "...different musical languages may also have certain sounds in common... in almost all cultures, for example, the octave and the fifth... are treated as stable." Well put, we thought. But Babymetal? Well, they're just a bit bonkers. 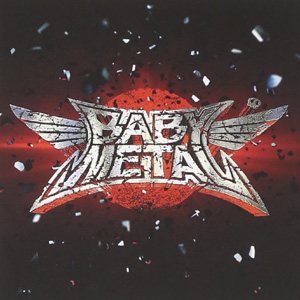 Music binds us all together as a passion around the planet and part of the cross border appeal may even be replicated in different songs, tunes and genres, but we promise you that there are few past experiences that can prepare you for this album. An amalgam of J-Pop (The catch all umbrella term of the hyper-extended country's indigenous commercial sounds) and various strains of modern extreme guitar music, the band - centered around the cherubic teenage trio of Suzuka Nakamoto (or known in character as "Su-metal"), Yui Mizuno ("Yuimetal)", and Moa Kikuchi ("Moametal") - the group deliver a sensory overload of jumbled noises, associations and styles, the resulting smorgasbord being self described as "Kawaii", or "Cute" metal.

Given the context has only a passing grip on the world we Europhiles know, we found that it's best just to dive in. Probably the most easily accessible point is on 'Gimme Chocolate', a wide-eyed piece of thrash on which the girls shout frantic counterpoints to some bippy synths and nasty riffs before singing a chorus much like The Supremes would deliver if they'd been raised on Slipknot. If this sounds bizarre, it's because to our Western ears, it is. An environment where odd juxtapositions are just what happens, the following 'line!' is reassuringly odd, being massive adolescent pop with an r&b interlude, followed immediately by a tidal wave of death grunts, followed then by a frantic EDM sequence. A little crazed? Of course, but presumably somebody did all this stuff deliberately and the underlying idea is an interesting one: if the human psyche is used to listening to the body of a song which at least has similar roots in tempo, meter and key, what about we just chuck all that stuff in the mixer and see what happens? In return we can guarantee you'll be either baffled or thrilled: in the Baby Metal world, there are no half way houses.

Babymetal is a group which could only have hailed from Japan, could only have found success thanks to Youtube and could only have been chosen by Lady GaGa as a support act on her 'ArtRave' tour. Three teenaged girls in matching outfits singing and dancing onstage to ‘heavy metal’ music, Babymetal needs to be seen and heard to be believed. Yet after seeing it we’re still not sure if we didn't just imagine the whole thing. The origins of Babymetal are found in girl group Sakura Gakuin, a pop act manufacture by a Japanese talent agency, which employs an ever changing line-up. Basically when a member gets too old (ie around 16) they get kicked out (or graduate) from the group. One day the group’s manager had an idea for an interesting musical experiment. “Why don’t we try and fuse metal music with cutesy pop,” we assume he said, and thus Babymetal was created using Sakura Gakuin members Suzuka Nakamoto, Moa Kikuchi and Yui Mizuno.