Diss-Harmony: Is Angel Haze’s 'Shut The F*ck Up' The End Of Her Feud With Azealia Banks? 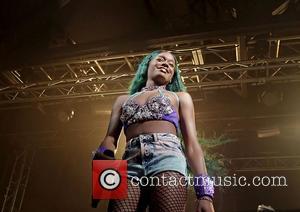 Most artists nominated in this year’s BBC Sound of 2013 shortlist will have been celebrating politely since their names were announced. Not so for Angel Haze, who instead has been feuding with fellow rapper Azealia Banks on Twitter.

The beef has spilled out into the recording studio, where both artists have recorded tracks dissing the other. Angel Haze’s latest attack, entitled ‘Shut The F*ck Up’ comes with the additional insult of being unmastered, as Haze claims that Banks isn’t worth the studio time to get the track finished properly. That’s a proper musician’s insult, that one.

‘Shut The F*ck Up,’ starts with a pretty vicious attack on Banks’ appearance and, well, continues in pretty much the same manner, “my whole style is really f*cking outta your range… when I see you all I wanna do is step on your jaw.” Now now, ladies, play nice. This is the second track that Angel Haze has recorded, aimed at Azealia. The first was ‘On The Edge,’ which featured the lines “b*tch, I got ammo on you… I been making moves, b*tch, plotting my fate, looking at you whack ho’s like ‘whose spot should I take?’”

Banks responded with ‘No Problems’ and all three tracks are on the artists’ respective Soundcloud pages for all to see. Haze posted a tweet yesterday attempting to draw a line under the war of words, saying “Done. Last diss track you’ll ever hear from me. Later. Back to living my great ass life.” Given how easily these two seem to rile each other up, though, don’t be surprised if you haven’t heard the last of it.

Take a listen to those tracks yourself... WARNING: All tracks contain explicit language