Azealia Banks has revealed her new larger breasts on Twitter after having enhancement surgery. 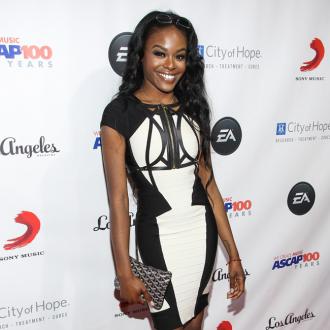 The '212' rapper revealed her ample new chest in a bombastic new video posted to her Twitter account.

She captioned the video writing: ''NEW TIDDIES ON THE BLOCK (sic)''

The 24-year-old star's transformation follows her recent legal trouble for making a homophobic slur on a flight from New York to Los Angeles.

Azealia reportedly tried to make quick exit from her seat in row six when her Delta flight landed, but a French couple a few rows ahead were blocking the aisle as they pulled their luggage from the overhead compartments.

An onlooker told TMZ that the rapper tried to squeeze past the couple, but the man put his hand out and the rapper ''went nuts'', spitting and punching him in the face and clawing at his shirt.

A flight attendant then told her to calm down and she lost her balance, fell to the seat before demanding to get her bag and leave and, in a subsequent row, called the airline staff member a ''f***ing f****t''.

And the rapper went on a rant about the LGBT community on Twitter yesterday (25.09.15), writing: ''Gay male misogyny has driven me to my breaking point. I no longer want to be associated with anything LGBT.

''Gay white men don't support anyone gay but themselves and I'm sick of the bulls**t. Leave me out of it.''