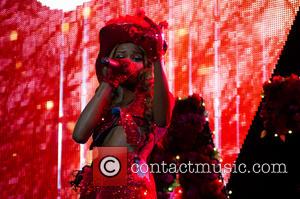 Rapper Azealia Banks has launched a scathing attack on Pharrell Williams, blaming the singer/producer for the poor performance of her latest single Atm Jam in the U.K. charts.

The 212 hitmaker's new track, which features Williams on vocals, peaked at an embarrassing 169 on the British countdown following its release in August (13), and Banks insists the negative response to the song is all down to the superstar, claiming he did not want to be associated with her following his own success with dance act Daft Punk this year (13).

The outspoken star, who told fans in September (13) that she was deleting the track from her debut album Broke with Expensive Taste because of the negative reviews, took to Twitter.com on Tuesday (12Nov13) to share her controversial opinion.

She writes, "The reason Atm jam did poorly is because pharell changed his mind about wanting to be associated with me after he had his lite (sic) skin comeback... But f**k it what's new? Azealia banks having to scrape claw and fight for what she wants. This is normal for me now."

Williams has yet to respond to the accusations made by Banks.