Review of Broke With Expensive Taste Album by Azealia Banks

Azealia Banks has been surrounded by hype since first really gaining momentum back in 2011. 'Broke With Expensive Taste' has suffered a couple of setbacks, falling victim to label politics and several delays. It's finally here though, and Azealia demonstrates her fast-paced flow throughout, working with a range of producers including AraabMuzik and Lazy Jay, and the up-tempo, electronic sound and influence is scattered throughout the album. Banks has demonstrated before, on her breakout single '212' which despite its age is included on the album, that she has the ability to construct really well structured bars while keeping a commercial leaning production style, and she's consistent in that fact on 'Broke With Expensive Taste'. 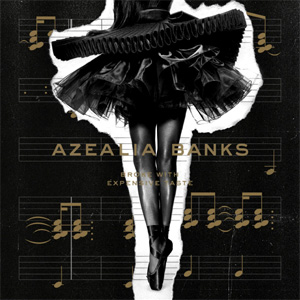 The album starts off strongly enough, with the minimal production of 'Idle Delilah' hooking you in, before Banks' cheeky and sweet vocal introduction sets the tone. Once the carnival horns kick in, the electronic influences are extremely apparent, and the Harlem MC switches from sung sections to frantic spitting, and there is also a couple of instrumental breakdowns. The style outlined on the opener continues for much of the first half of the album, a whole list of tracks have a passable commercial appeal and consistent house-inspired production. Tracks like 'Desperado' show exactly where Azealia Banks really impresses; the up-tempo drums, haunting keys and smokey brass back Banks as she kills the beat with intricately structured lyrics over a garage style instrumental, courtesy of M. J. Cole. This ability on the mic that Azealia possesses was first really shoved in our faces when '212' dropped, and it still sounds fresh on 'Broke With Expensive Taste'; it's just a pity that she doesn't seem to come close to giving us that organic impression again.

The bass heavy production continues with tracks like 'Heavy Metal & Reflective' and 'Bbd', but the result sounds a little uninspired, and the sound gets tedious rather quickly. The AraabMuzik produced 'Ice Princess' is an exception to this, the menacing synth lines and half time drums backing Azealia's convincing vocals - however, there's something not quite fitting about the four to the floor, more commercial hook sound. This confused feeling is something that is apparent on much of the album; the tribal sounding 'Soda'; the pulsating, glistening 'Chasing Time' that wouldn't sound out of place in your least favourite club in town; and the strange Disney doo-wop of 'Nude Beach a Go-Go' really don't do much for the cohesiveness of 'Broke With Expensive Taste'. Azealia sacrifices much of what first attracted her fans; the upbeat, house influenced production coupled with serious rapping and elaborately structured bars with impressive multi-syllabics to boot. Rapping seems to have taken a back seat on 'Broke With Expensive Taste'.

Azealia Banks hasn't created a masterpiece for her debut full length offering. The eclectic mix of producers that contribute beats for the album seems to have resulted in a rather confused offering. It's an interesting soundscape, with house and garage infused instrumentals backing Azealia's vocals and rapping, but it's the quality of the latter that really lets this album down. The combination can work, and indeed does work very well at certain points on 'Broke With Expensive Taste', but for the most part this has left me a little frustrated. It's still worth checking, just be prepared for a number of muddled tracks, and not much of the charm that was apparent when she first came onto the scene.