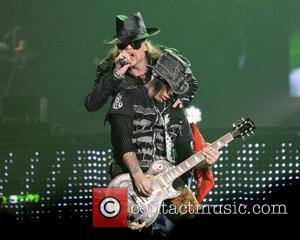 Axl Rose is inviting fans from all over the world to rock out with GUNS N' ROSES when they perform in Chicago, Illinois this Friday (24Feb12) - by making a charity donation to stream the concert live online.
The stars will hit the stage at the famed House of Blues as part of their U.S. tour and they have teamed up with Feeding America bosses to turn the show into a fundraiser.
Devotees will be charged $5 (£3.13) to broadcast the gig via the Internet, and a portion of the proceeds will be handed over to the hunger relief organisation.