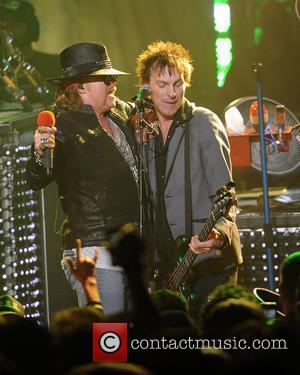 Axl Rose has publicly declined the offer of being inducted into the Rock n Roll Hall of Fame, according to BBC News today (April 12, 2012). It's an accolade that many musicians strive for, their whole lives and most never succeed. Axl's band Guns N Roses were due to be inducted in a ceremony this Saturday (April 14, 2012) and many fans had hoped that the event would reunite Rose with the original members of the band, Duff Mckagan, Slash, STEVEN ADLER, Matt Sorum and IZZY STRADLIN.

In an open letter, Axl said "There's a seemingly endless amount of revisionism and fantasies out there for the sake of self-promotion and business opportunities masking the actual realities.So let sleeping dogs lie or lying dogs sleep or whatever. Time to move on. People get divorced. Life doesn't owe you your own personal happy ending especially at another's, or in this case several others', expense." Axl is currently the only original member of the band still performing under the name Guns N Roses. He has stressed that he does not wish to be inducted in absentia and the repose from the Hall of Fame said "We are sorry that he will not be able to accept his induction in person."

His former guitarist, Slash, told Associated Press that he would still be in attendance but was unclear as to exactly what would happen on the day: "I have no idea what's going to happen on that day. It's more like going into it with blinders on and just see what happens." The last time the current line-up of Guns N Roses performed was in Dublin, 2010. They were bottled off stage after being nearly an hour late to arrive onstage.