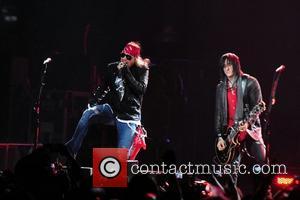 GUNS N' ROSES frontman Axl Rose has blamed the band's mammoth Use Your Illusion tour 20 years ago for his reputation for keeping audiences waiting for hours.
The Paradise City singer is widely regarded as the tardiest man in rock for frequently showing up at concerts long after stage time.
His behaviour has caused cancelled shows and has even sparked rioting by fans - but Rose is adamant he's not to blame, citing the group's record-breaking 28-month string of concerts in the early 1990s for his reputation.
He claims he should not have been on the road for the shows and insists his image as a poor timekeeper stems from the many cancellations during that tour.
In an interview for VH1's That Metal Show, Rose says, "A lot of this goes back to '91, and when we were super-late going onstage. And that really has more to do with... I should not have been on that tour... I should have not agreed to do that tour, but didn't know how to get out of it."
He then adds, "(I'm) not complaining, or to be a wuss or whatever, just a lot of times, day of show for some reason, everything starts going wrong. People are making mistakes... you're making mistakes, and nobody even knows why."