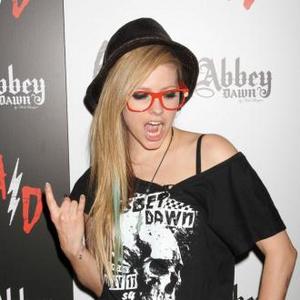 Avril Lavigne's engagement ring is worth a reported $350,000.

The 'Complicated' singer recently got engaged to Nickelback frontman Chad Kroeger and he has given her with a very expensive rock.

Jewelry expert Michael O'Connor added of The Ring: ''A pear shape diamond set in platinum is a nod to vintage glamour and individuality - perfect for a rocker like Avril. The half-moon diamonds are also rare since they would have to be specially cut to fit on either side of the center diamond. The center diamond is approximately 10 carats, with an additional four carats of total side diamonds.''

Avril and Chad - who have been dating for around six months - celebrated their engagement by partying in Las Vegas.

The couple were ''super cuddly and affectionate'' as they drank Dom Perignon champagne and Grey Goose vodka in the gambling city on Tuesday (21.08.12) to celebrate their forthcoming marriage.

An eye witnesss aid: ''They went to 1 Oak Nightclub in Las Vegas on August 21 to celebrate their engagement.

''Avril arrived first with a bunch of male friends and bodyguards, then Chad showed up later and met them inside. Avril was so excited to see her man.

''They were super cuddly and affectionate. They drank Dom PÃ©rignon and Grey Goose.''

The marriage will be the second for Avril - who wed Sum 41 singer Deryck Whibley in July 2006, splitting three years later - but it is Chad's first.