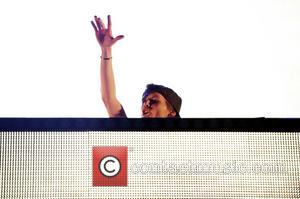 Dj Deadmau5 has stepped in to replace ailing Avicii at the Ultra Music Festival in Miami, Florida.

The Wake Me Up hitmaker has been forced to scrap his weekend shows at the event following a medical emergency, which prompted him to axe gigs on Thursday (27Mar14) and Friday (28Mar14).

Now festival organisers have announced Deadmau5 will take his place in the line-up at Bayfront Park on Saturday night (29Mar14).

Avicii checked in to a Miami-area hospital on Thursday following problems with his gallbladder.

A statement from festival bosses reads: "Avicii has been diagnosed as having a blocked gall bladder and is currently being evaluated for a potential surgery to remove his gall bladder. He has had to cancel all his commitments for the week."