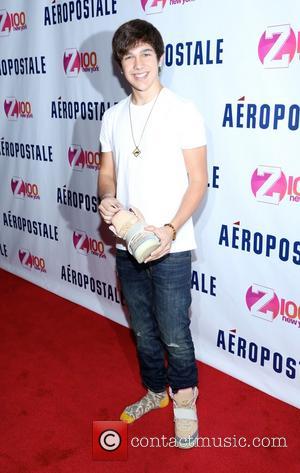 Singer Austin Mahone took to the stage on Saturday (02Nov13) for the first time since battling a blood clot in his throat last month (Oct13).

The What About Love hitmaker was forced to postpone his autumn tour until next year (14), after coming down with a 104-degree Fahrenheit (40-degree Celsius) fever as he battled a severe bout of influenza.

While under doctor's care, it was discovered the 17 year old had "a blood clot and extreme inflammation in his throat as well as severe dehydration".

The pop star was released from the hospital last month (Oct13), and on Saturday, he performed at a bar mitzvah in New York for the twin sons of vice president of Republic Records, Charlie Walk.