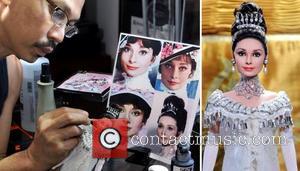 Picture: Audrey Hepburn and Noel Cruz - Accomplishing this feat requires many photos of the famous person/character, plenty of time, and a great deal of skill......

The increasing strength of anti-smoking groups has affected Hollywood, with smoking a rarity in modern cinema, a conference has heard.

The Hollywood Addictions lecture, carried out by Dr Simon Brown of Kingston's School of Performance and Screen Studies, revealed that filmmakers have responded to growing public opposition to smoking by preventing heroic characters from lighting up.

And according to Dr Brown, smokers in modern films now tend to be the villains of the piece.

"The glamour days of the romantic smoking hero and heroine are long since past but, like a reluctant quitter, Hollywood will look back on its habit with fondness for years to come," he explained, in reference to Audrey Hepburn's frequently smoking Holly Golightly in Breakfast at Tiffany's.

And examining the change in the action genre, he explained that while in Die Hard, Bruce Willis' John McClane was "armed only with his wits, a sense of humour and a packet of Gauloises", by the time Die Hard 4 hit the screen in 2007, he seemed to have "lost his addiction along with his hair".

"We are watching Hollywood react to smoking passing from socially acceptable to socially unacceptable," he added.

"For years pressure groups have complained about violence in films or sex or swearing and the industry has resisted in the name of freedom of expression of the artist.

"Now Hollywood has to balance that freedom against society's increasing hostility to smoking."

One can't help but wonder how Roman Holiday would have been different is it was...