Audio Bullys make a return to form with their new single 'Only Man' released at the start of March. This is the first track from their new album Higher Than The Eifel released through Cooking Vinyl.

It's been over four years since Simon Franks and Tom Dinsdale released material together. Their last album Generation featured the hit single 'Shot You Down' which used a sample of the classic Nancy Sinatra track 'Bang Bang (My Baby Shot Me Down)'. Speaking about the new album Simon said it was one more for his friend rather than the record label.

Higher Than The Eifel Track listing: Drums (On With The Story) - Only Man - Daisy Chains - Feel Alright - Twist Me Up - Dynamite - Drained Out - London Dreamer - The Future Belongs To Us - Shotgun - Dragging Me Down - Smiling Faces - Kiss The Sky - Goodbye 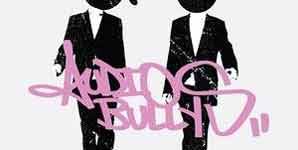 Audio Bullys - Shot you down