Tv Star Atticus Shaffer Has Heaped Praise On His Mother For Refusing To Let The Actor Receive Special Treatment As A Child After He Was Diagnosed With A Rare Brittle Bone Condition. 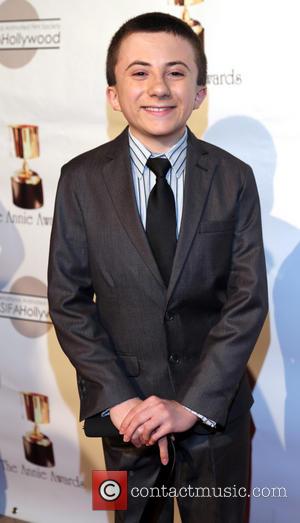 The Middle actor was born with type four osteogenesis imperfecta, an ailment which leads to fragile bones, and doctors had initially warned his mum Debbie to prepare her son for life in a wheelchair.

However, Debbie wanted her boy to live as normal a life as possible and she insisted he face his mobility issues head on.

Opening up about his condition for the first time, he tells U.S. talk show The View, "We were at this one hospital and because it's a rare condition, not a lot of people know about it. At the hospital, this expert had five patients, me being the fifth. He shook my mum and said, 'You have to get a grip on the fact that your son is going to be in a wheelchair for the rest of his life', and my mum would not have it, at all.

"If it wasn't for my mum, I would not be standing here, actually standing. That's what's so cool about my mum. She was there for me and she never wanted me to feel any different."

Shaffer, who occasionally uses an aid to walk, recently attended a medical convention about osteogenesis imperfecta and he reveals meeting others with the condition inspired him to speak out and become a "voice" for those battling the illness.

The teenager explains, "I was able to speak... and it was a lot of fun because I was able to speak with my mum, and I met a lot of people with O.I. and they all had this amazing, individual personality, so I figured now would be the right time to set things straight with me and also give them inspiration and gratitude and... (give them) a voice."

He adds, "It's a genetic condition, it's something you're born with... Granted it is a challenge, and granted it can be very painful... (But) you have to treat O.I. children and O.I. adults on (an) individual basis... I talked to people who were type three (and) one of them was in a wheelchair but she was perfectly fine and she had her mind and her heart... and the other gentleman was walking around perfectly fine, so it's on an individual basis."