It's been 18 years since Hawke, Delpy and Linklater introduced us to Jesse and Celine, and their story just gets richer, funnier and more punchy each time we see them. In 1995's Before Sunrise, they were idealistic 23-year-olds. In 2004's Before Sunset, they were thinking about bigger issues, including their future. Now at age 41, they're approaching middle age and asking questions about their life choices.

We catch up with Jesse and Celine (Hawke and Delpy) on a Greek island, where they're just finishing their summer holiday. As they prepare to go home to Paris with their 7-year-old twins (Jennifer and Charlotte Prior), Jesse's 13-year-old son Hank (Davey-Fitzpatrick) is returning to his still-angry mother in Chicago. But Jesse is wishing he had more time with Hank, and floats the idea of moving to America. This makes Celine furious, since she's just about to start an exciting new job. Clearly it's time to take stock of their relationship and make some important decisions.

Watching these characters (and the actors playing them) age is fascinating, as they encounter different issues at each stage of life. It's not necessary to have seen the earlier films, because they were essentially different people back then. This movie stands on its own as a snappy, deeply resonant look at a crunch-point in a relationship, as a couple tries to decide if their still-burning passion is strong enough to carry them forward. And Hawke and Delpy deliver the dialog impeccably, with razor-sharp wit and artistic sensitivity swirling through everything they say. Watching them is a joy.

Jesse and Celine return, though their love life is not what it once was. They are now married with twin daughters, Jesse is a successful novelist and Celine is contemplating a change of career. However, it's 18 years since they first met on a train from Budapest, 18 years since they wandered around the city of Vienna throughout the night rapidly falling more in love by the strike of each hour, and 9 years since they rekindled that whirlwind romance following the release of Jesse's best-selling book about their encounter. Now in Greece, Jesse feels a little sad about seeing his son Hank fly back to his mother (Jesse's ex-wife) and he and Celine are facing increasing strain on their relationship. Despite wooing the friends they meet in Greece with the romantic tale of their relationship, Celine has doubts as to whether he is the man she once loved and whether she is still the woman he was once so enchanted by. They are given another night alone in which to enjoy each other's company, but will it just turn into a desperate struggle to save their floundering marriage?

From the Greek filmmakers behind the acclaimed anti-thriller Dogtooth, this fiendishly inventive drama is just as complex and telling. But it's also a more difficult film to enjoy, as it doesn't reveal its twisty, freaky secrets until rather late in the story. So before then, we have no choice but to just go along with it. Intriguingly, this leaves us perfectly prepared for a real emotional punch.

But it begins rather confusingly as four people meet up in a gymnastics practice room. The coach (Vekris) berates a gymnast (Labed), telling her that she's not ready for pop music. The other two work in a nearby hospital: a nurse (Papoulia) and a paramedic (Servetalis). And they call themselves "Alps", because it's a name that's deliberately misleading. It turns out that their job is to help people come to terms with the death of a loved one by roleplaying a character in the life of the bereaved. But reality and fantasy aren't that easy to keep separate.

Essentially, this extraordinary film is exploring the roles we all play in everyday life, both at work and at home. And how difficult it can be to tell the difference between who we want to be and who we really are. As the premise slowly comes into clearer focus, the filmmakers also challenge our preconceived ideas of identity and grief, and even gender issues get a work-out as most events are seen through the female characters' eyes.

By Rich Cline
Excellent
Elusive, dryly witty filmmaking sometimes makes watching this Greek drama a bit of a challenge, but it's so quietly revelatory and powerfully observant that we're drawn into the journey of the central character. And more adventurous filmgoers will love it. 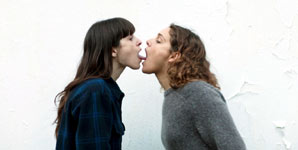 In her early 20s, Marina (Labed) is struggling with the fact that her intellectual, caring father (Mourikis) has a terminal illness. As she spends time with him - their favourite activity is to watch and mimic David Attenborough's nature documentaries - she begins to ponder life beyond him for the first time, including issues of sex and sexuality. Meanwhile, Marina's lively friend Bella (Randou) continually challenges her to overcome her inhibitions. When she meets an engineer (Lanthimos) in a pub, her inexperience shows, but he too patiently helps her blossom.

From the Greek filmmakers behind the acclaimed anti-thriller Dogtooth, this fiendishly inventive drama is just...