Showtime drama 'Billions' has proven to be quite the groundbreaking series with the inclusion of gender non-binary actor Asia Kate Dillon. The actor opened up about life as a genderqueer celebrity in an interview with Ellen Degeneres, who went to great lengths to educate viewers on this little known about topic. 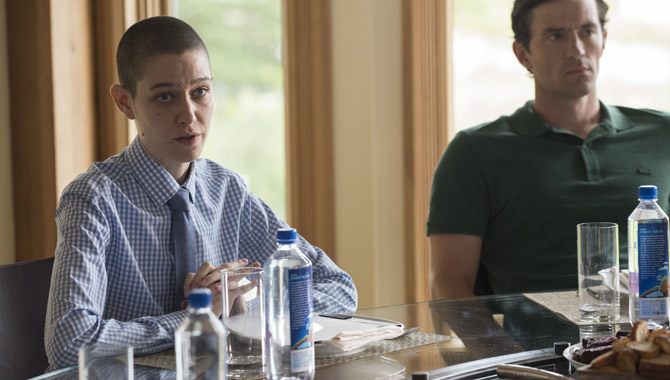 Asia, who prefers to be referred to by the pronouns 'they', 'their' and 'them', was assigned female at birth, but lived their entire life in androgyny, starting with when they were just a child and wishing they could one day get to play the role of Oliver Twist.

'I felt ambiguous about my gender identity from a very young age', said Asia on 'The Ellen Show'. 'I can remember actually seeing the film 'Oliver!' and understanding so badly that I wanted to play that part but that I would never be able to because I was a girl and Oliver was a boy and before I had language to put to those feelings I remember it feeling unjust.'

Probably most recognised for their role as Brandy in 'Orange Is the New Black', Asia has gone on to star in the law drama 'Billions', which follows the life and career of a charitable yet not entirely law-abiding hedge fund manager named Bobby 'Axe' Axelrod (Damian Lewis). He frequently comes face to face with a U.S. Attorney named Chuck Rhoades Jr. (Paul Giamatti) who hates rich criminals.

Asia's role in the series is as Axe Capital intern Taylor Mason, who was actually written as a non-binary female in the series. That concept was initially alien to Asia who, even having been genderqueer for most of their life, struggled to understand the idea that one could identify as such when the words sound so contradictory.

'Something I learned when doing research for the character of Taylor that I play on 'Billions', Taylor is female and non-binary', they revealed. 'I thought, 'Well, how can those two things co-exist?' So after doing some research, I understood sex and identity are different. Female is a sex and sex is between our legs, gender identity is between our ears.'

If it sounds like a confusing enterprise to you, you're not alone. Even Ellen had trouble grasping this newfound spectrum of gender identity. 'I think people assume that just because I'm gay I understand all of this, and I don't', she confessed. On that note, it's worth mentioning that just because Asia Kate Dillon is queer doesn't mean they're gay; they actually have a boyfriend, or a 'partner who is a self-identified man' as they put it.

Asia Kate Dillon is one of a handful of stars who have 'come out' in the last few years as non-binary, gender neutral, gender fluid or genderqueer. Another 'Orange Is The New Black' star, Ruby Rose, is probably the most notable one, while Miley Cyrus confessed such sentiments in 2015. It marks an important change in people's attitudes towards identity and equality, and that can only be a positive thing.