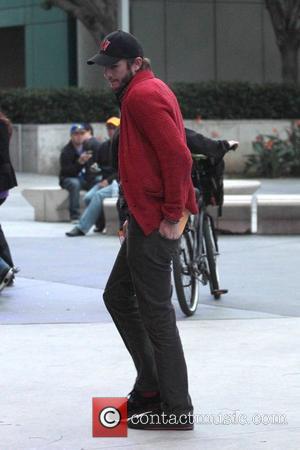 Trendy snack food makers 'Popchips' have apologized for their internet advert, starring Ashton Kutcher, which was dubbed racist by some critics. The commercial features the Two and a Half Men star in brownface as a lothario Bollywood film producer, reports the Afp.
The advert was slammed for its racial undertones, and Popchips conceded they had received "a lot of feedback" and had made the decision to pull the Bollywood section of the advert. Kutcher also plays a hippy, as well as an over-the-top fashion designer called Darl and a biker. New York tech consultant and blogger Anil Dash was among the first to slam the video, saying, "Don't watch it; It's a hackneyed, unfunny advertisement featuring Kutcher in brownface ... with the entire punchline being that he's doing it in a fake-Indian outfit and voice". The rap outfit Das Racist asked Kutcher on Twitter, "Hey aplusk, what's with the racist brownface video?" Popchips founder Keith Belling apologized on his corporate blog, saying, "Our team worked hard to create a light-hearted parody featuring a variety of characters that was meant to provide a few laughs.We did not intend to offend anyone. I take full responsibility and apologize to anyone we offended".
The video echoes the promo shown at the Oscars earlier this year, when host Billy Crystal was criticized for blackening his face.