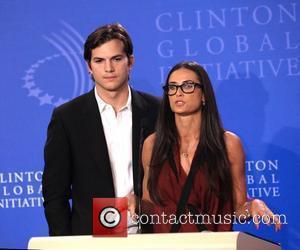 Lawyers for Ashton Kutcher have threatened legal action against bosses at an adult entertainment company after the star's name was used to promote a sex tape.
Vivid Entertainment chiefs are set to release a new porn video featuring Brittney Jones, who claims to have slept with the actor, and have put out a press release for the clip declaring: "Ashton's fans will undoubtedly enjoy seeing what the star himself may have experienced."
Attorneys for the Just Married star claim the association infringes on his "marketable celebrity identity value" and have threatened to take legal action if his name is not removed.
The letter from Robert D. Offer reads, "It is clear that the use of our client's name is a principal selling point of the video, and that Mr. Kutcher's name is being used in order to lure potential customers to buy the video...
"Your conduct has already caused, and will continue to cause, substantial damages to our client. We will advise our client to seek recovery from Vivid... to the fullest extent allowable under law for any damages, costs and/or liability suffered by him."
Vivid boss Steve Hirsch tells TMZ.com, "We received the letter late this afternoon and I immediately forwarded it to my attorney. We will respond accordingly."