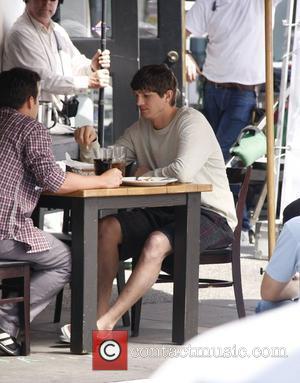 Picture: Ashton Kutcher on the set of 'Friends with benefits' at Toast bakery Los Angeles, USA - 12.05.10

Ashton Kutcher disappointed his wife Demi Moore by failing to maintain the toned physique he worked up for new movie Killers.
In the film, the actor plays an undercover assassin who quits his job when he falls in love with a woman played by Katherine Heigl.
Kutcher spent hours in the gym working out for the role, but since filming finished, the star has ditched his lengthy workouts - and Moore is urging him to tone up again.
He tells Britain's GMTV, "Unfortunately... I kinda wish that I hadn't (let her see the movie) because now she expects (my body) to look like that and it doesn't. You can't maintain that. That's not possible. I disappoint her every evening. I walk in to get ready to go to bed and she's just, 'Oh'. She's like, 'You know what that's capable of, you're not living up to your potential'."