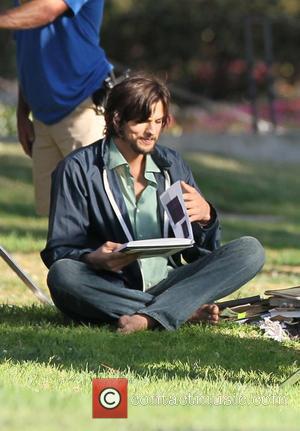 Ashton Kutcher and Mila Kunis may have denied rumors of a romance in recent months, though it's becoming ever more difficult for the pair to maintain the "just friends" line. Mila appeared to be Ashton's date at a bash at club Duplex in Hollywood on Thursday evening (July 26, 2012).
Dressed casually, the pair arrived to the party in Ashton's car and made no attempt to hide from photographers, according to the New York Daily News. The date night comes after the long-time friends were snapped in a steamy embrace about a week ago - at the wrap party for Kutcher's Steve Jobs' biopic 'Jobs'. The pair met around 15 years ago and starred alongside each other in the Fox hit 'That 70s Show', remaining close friends since. Speaking to Elle Uk in August, Kunis played down any links to Kutcher, saying, "I am totally single.Listen, we hang out. We've known each other for 15 years. We have mutual friends. We're comfortable with one another. That's it! There's no crazy love story, nothing more". Tabloid reports had suggested that Ashton's ex-wife Demi Moore was devastated by the couple's new romance, though she was snapped looking happy with New Zealand actor Martin Henderson in Connecticut this week.
Kutcher's Steve Jobs biopic is set for release in 2013. It follows the late Apple boss' ascension from college dropout into iconic entrepreneur.