Ashley Olsen Not Dating Jason Sudeikis, But Mary-kate Could Be 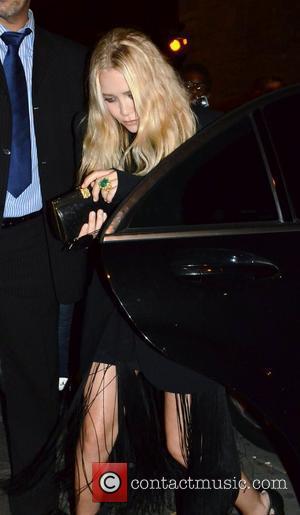 Despite initial reports, Ashley Olsen wasn't spotted getting close to Jason Sudeikis at the Stone Rose Lounge in New York on Monday (24th October 2011), but her twin sister MARY-KATE OLSON did cosy up to the funny man.
According to E! News, Mary-Kate and Jason "snuggled" during the Tower Heist after-party, hosted by filmmaker Brett Ratner. Despite initial confusion as to which Olson twin the actor had eyes for, a source revealed, "Mary-Kate was spotted with Jason at the Stone Rose Lounge.While Ashley was busy chatting up Brett Ratner, Eddie Murphy and Casey Affleck, Mary-Kate stuck by Jason's side all night long. They were laughing and having a great time together all night. It was cute". The fashion duo's representative immediately played down a romantic link, saying, "Ashley, Mary-Kate and Jason were all at the after party.We all hung out together as I work with all of them. That is the extent to it". There was some suggestion that controversial actress Paz de la Huerta had a tearful scene at the bash, but a source confirmed, "Paz accidentally spilled her drink on her friend".
Tower Heist, starring Ben Stiller and Eddie Murphy, follows a group of workers who realise they've fallen victim to a wealthy businessman's Ponzi scheme, vowing to extract revenge. The film hits cinemas in the UK on 2nd November 2011, and in the U.S. two days later.