Ashlee Simpson is set to marry for the second time as Diana Ross's son, Evan, asks the big question during a trip to Hawaii. 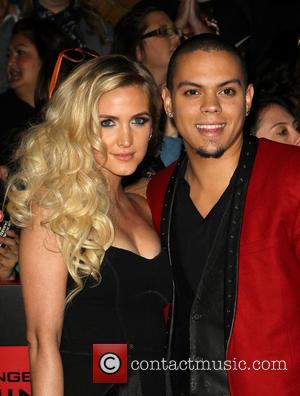 Ashlee Simpson is set to walk down the aisle.

The 29 year-old, announced via twitter, that she got engaged to actor Evan Ross while on a trip to Hawaii.

'Bay Love' is a reference to the iconic song sang by Evan's mother Diana Ross.

"The love of my life said YES!!!!!!" the 25 year-old wrote as well as sharing a photo of himself and Ashlee.

The pair were first rumoured to be dating this past July (2013) after they were spotted holding hands on a night out in Los Angeles.

The pair eventually went public with their relationship in that same month at the launch of Jessica Simpson's (her sister) new clothing line in New York City.

This past November at the premiere of 'The Hunger Games: Catching Fire', Ross told 'omg Insider!', "she's the one" adding, "It's amazing. I'm so in love and we've got amazing things going on. And we inspire each other."

At the same premiere, Simpson told E!News, "I am really happy."

This will be the second time the 'I Am Me' hit maker has tied the knot as she was previously married to Fall Out Boy bassist Pete Wentz from 2008 until 2011. They had a child together called Bronx who is 5 years-old.

This may not be the only wedding happening soon in the Simpson family as her big sister, Jessica, recently appeared on 'Good Morning America' and spoke about her desire to marry fiancé Eric Johnson.

"We need to get married," Simpson said. "I already feel like we're like an old married couple already. If he wanted to run, he could have run when I was hormonal and pregnant."