10. Jack Danz - Ouija Slang
Jack Danz is one third of Defenders of Style, leading exports of the West Yorkshire hip-hop scene (alongside Joe Snow and Prys) who also dropped their excellent The Death Of Meaning album this year. The producer/rapper released his debut solo LP Ouija Slang through Sheffield based independent label Bad Taste Records. The vivid imagery, hard-hitting eclectic production and a vast array of quotable punchlines (e.g. I'm in the club getting lifted like the world cup) make Danz's album one you can constantly revisit and repeatedly enjoy.

9. BlabberMouf - Da BlabberMouf LP
Dutch MC BlabberMouf's 2015 solo album is a breath of fresh air. It's rare that a rapper can sound so authentically nineties. Da BlabberMouf LP sounds as if it was recorded back in '95, and has been lost to the world until now. With a rapid delivery, raw energy and quality production, BlabberMouf spits with a unique charisma that sets him apart from the competition. European hip-hop is often overlooked, but this LP is one of the most impressive releases in a year dominated by quality American and British rap music.

8. Gangrene - You Disgust Me
Oh No and The Alchemist reunite for their third studio album You Disgust Me, released through Nas' Mass Appeal Records. The duo, consisting of two of the strongest and most interesting producer/rappers out there, showcase their raw, soulful edge on this album, which features appearances from Action Bronson, Sean Price and others. With passionate lyricism and expertly crafted beats, You Disgust Me is a reminder that Oh No and The Alchemist are skilled, consistent and versatile, both with the beats and the rhymes.

7. Dirty Dike - Sucking On Prawns In The Moonlight
Cambridge rapper and producer Dirty Dike released his fourth studio album Sucking On Prawns In The Moonlight through the powerhouse that is High Focus Records. The album was a fantastic example of Dike's recent expansion into the beat-making world, with some eclectic and unique production choices; tracks like Crystal Cindy or the Posse Gang Eight Million finale take a more electronic direction, whereas Me & You featuring Jam Baxter is one of my favourite hip-hop tracks of the year. Dike's writing has a more personal and introspective angle to it this time around, and his entertaining, intelligent and raw lyricism is more impressive than ever.

6. Vic Spencer - The Cost Of Victory
Chicago spitter Vic Spencer released The Cost Of Victory back in January, and for the past twelve months his flawless ear for beats, gritty wit and instantly recognisable tone has rarely left rotation. Spencer has been grinding independently for a good number of years now, and this LP is a continuation of his unique vibe, which sets him apart from his peers in the Chi-town scene. With appearances from Sean Price, Illa Ghee and Black Spade, amongst others, The Cost Of Victory is a fantastically well sequenced LP with a great sense of continuity and cohesiveness.

5. A$AP Rocky - At. Long. La$t. ASAP
A$AP Rocky came into his own this year with At.Long.Last.A$AP, his second studio album. The growth and maturity, both in terms of content and sonics, is so obviously apparent on this album; tracks like Holy Ghost and Max B are examples of the soulful, artistic and tasteful sound Rocky brings on the LP, and a number of faultless guest appearances from British singer-songwriter Joe Fox (who A$AP Rocky practically discovered) help enhance the passionate soundscape found across A.L.L.A. Rocky shows that he's much more than an internet trend, and his content goes beyond swag and lifestyle rap; this album features an enhanced depth to Rocky's lyricism, and an intelligence to the album as a whole that results in it being one of the most expressive projects of 2015.

4. Kendrick Lamar - To Pimp A Butterfly
Where this album placed in my Top 10 caused a bit of a personal dilemma. Kendrick Lamar's To Pimp A Butterfly will, I'm sure, top the majority of critics' lists this year, both hip-hop specifically and the wider 'album's of the year' countdowns, and I've got no issue with that. Kendrick released one of the most ground-breaking rap albums in recent memory. Socially conscious and intelligent lyricism, some experimental musical choices that were pulled off flawlessly, and top class production from front to back make To Pimp A Butterfly an incredible album. The jazz, funk and soul influences here were just as instrumental to the success of the project as Kendrick's rhyming (which is more complex and thought-provoking than ever before), and this results in a very dense album. In years to come this album's legacy will stand the test of time, and there's no doubt it's one of the most important and influential releases of recent years. That's not the heading of this list is it though, so please don't jump on me for placing it fourth.

3. Stik Figa - Stik Figa Is Not Quite Himself
Kansas City MC Stik Figa released his Stik Figa Is Not Quite Himself album through the independent label Mello Music Group, who have been building and maintaining a formidable reputation over the past few years, with releases from a host of the underground's most exciting and talented artists. The album is a follow-up of sorts to Figa's 2012 As Himself album, and is packed with subtle, off-kilter jazzy production and melodic, entertaining flows. Produced entirely by Leonard Dstroy, Stik Figa Is Not Quite Himself is a versatile, eighteen track LP from one of the most criminally underrated artists in hip-hop. Songs like The Guilt or Gray Chevette showcase the individualistic, left-field style that is exploited expertly throughout the album, with the production complimenting the lyricism perfectly.

2. Czarface - Every Hero Needs A Villain
Wu-Tang Clan's Inspectah Deck teamed up with renowned underground hip-hop duo 7L and Esoteric for 2013s self-titled Czarface project. The chemistry was evident on that disc, and features from Vinnie Paz, Roc Marciano and Action Bronson amongst others only enhanced the experience. The loose comic-book theme was underpinned by hard-hitting boom bap production from 7L, and Deck and Esoteric delivered lyrical acrobatics for fourteen intense cuts. This year they released the follow-up, this time boasting appearances from Method Man, Meyhem Lauren and RA The Rugged Man to name just a few. The beats are incredibly raw, and the rhymes do them justice, plus every MC who makes a guest appearance on Every Hero Needs A Villain brings their A game. Not only did they match the impact of their debut, they improved upon it. This one hasn't left the tape-deck. 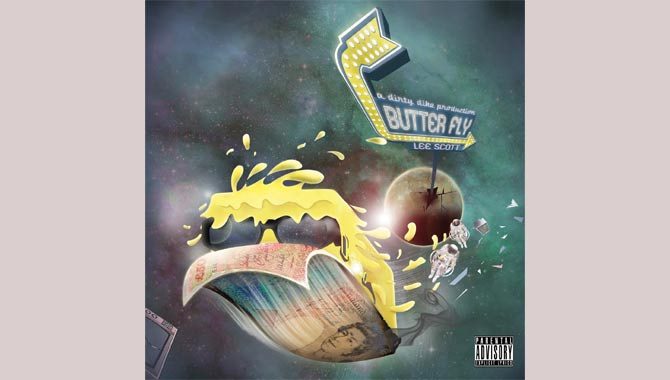 1. Lee Scott - Butter Fly
Veteran UK rapper Lee Scott released his Butter Fly LP through High Focus Records in April this year; produced entirely by Dirty Dike, the silky smooth jazz instrumentals are faultless, and the chemistry between the two High Focus artists is perfected over the album's ten tracks. Lee's writing is both witty and scathing; on Don't Tell Me he raps 'this is a world where bottled water can win an award/and freedom is a privilege only the rich can afford'. The standard of the bars, the unique jazzy soundscape and the indisputable replay value make Butter Fly the album I can't get enough of this year; across the ten tracks we get a variety of styles (including Lee showing off his singing capabilities on the LP's finale Butter Tits) and too many quotable bars to count. 2015 was another productive year for High Focus Records, and 2016 I'm sure will bring bigger and better things, but Butter Fly is going to be hard to top.