While there's still no explanation behind the singer trying to kill his ex wife, his music offers some clue.

The plot thickens in the case of As I Lay Dying’s Tim Lambesis trying to kill his wife. The divorce papers from their split show that it was a peaceful one, seemingly with no bad blood between the two of them. What seems to be the only thread linking to Lambesis’s plot was his strange behavior of late, which the court papers also reference. According to Meghan Lambesis’s testimony, her husband had become distant, constantly texting and ignoring his fatherly responsibilities. He had also become obsessed with bodybuilding and staying in shape, even creating a separate twitter account for his fitness activities (@gymlambesis, clever wordplay, no?)

Lambesis continued to see the couple’s three adopted children – ages 4, 8 and 10 – even after the divorce. He visited for about 10 hours a week, when the band wasn’t touring, according to court documents. But even his increased efforts in the gym don’t really seem to give any inkling of what was to come. The only indication of a darker, more pessimistic mood in his life comes from the tone of As I Lay Dying’s latest album, which Lambesis himself describes on the band’s official website as follows:

"On this record, I wasn't purposefully trying to be negative, but I think sometimes we have to be honest with some of the darker and more difficult times of our lives to get back to that positivity," Lambesis is quoted as saying. "While the lyrics do perhaps seem like a dark window into my soul, they're written that way specifically because I want to move on and transcend those difficult moments in life."

Now might be the time to say: Moving on - you're doing it wrong. 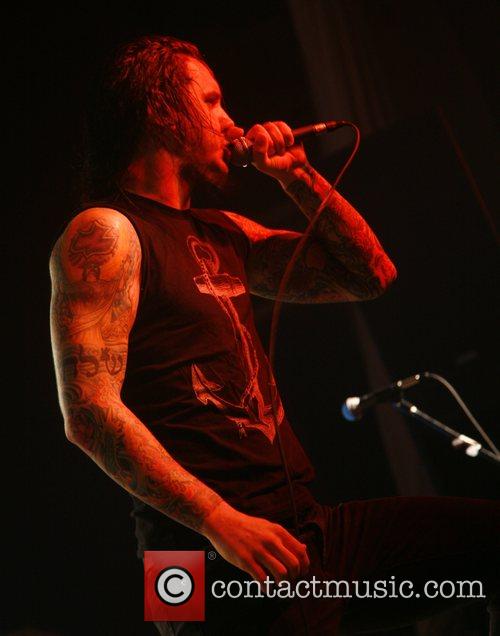 Lambesis performing with his band on their European tour.