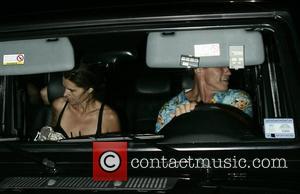 Arnold Schwarzenegger has ditched his beloved $950,000 (GBP500,000) fleet of Hummer cars in a bid to save the environment. The Terminator movie star-turned-California governor is devoted to the sport utility vehicles for their "precision". He was the first person to own one of cars in 1992 after persuading manufacturers to make them for non-army purposes. But Hummers emit three times more carbon dioxide than a regular car - and after the State of California announced it was suing carmakers Toyota, Nissan, Ford, Honda, Chrysler and General Motors over greenhouse gas emissions, ex movie star Schwarzenegger felt it was prudent to make the change. Eco-aware campaigner Al Gore confirms, "Arnie has given up his Hummers."

California Governor ARNOLD SCHWARZENEGGER has endorsed a new book by his ex-girlfriend even though it vilifies the former action man as a pot-smoking womaniser.