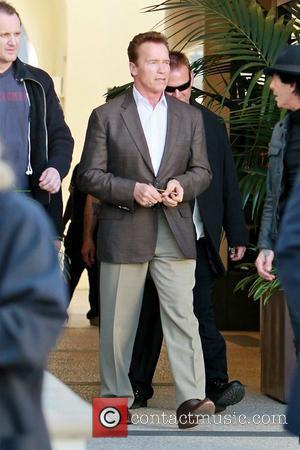 Arnold Schwarzenegger is considering a return to acting after he steps down from his post as California Governor next week (beg03Jan11).
The Terminator star stepped away from Hollywood to pursue a career in politics and he's been in charge of the state of California since 2003. He will step down at the beginning of 2011 and hand over the role to incoming Democrat Jerry Brown, sparking speculation over his next move.
Schwarzenegger, who filmed short cameo roles for Terminator Salvation and The Expendables during his stint as governor, admits he finds it easy to take up acting again after long breaks, but can't officially reveal his plans until he is out of office.
He tells Variety, "It is like bicycling, or like skiing. You get on it and you feel like there is no time lapse there at all...
"The list is a long list of things I can do, but nothing I can concentrate on until I am literally, totally out of office. For me the joy of life is not to know, and you get into it and you kind of figure it out. I love that. I don't like safety nets. I am not a believer in that... So you go in there with an open mind and you have to learn very quickly."
Schwarzenegger has also shot down rumours he is poised to take over the post of Chief of the Motion Picture Association of America, adding: "No one has come up to me about that."