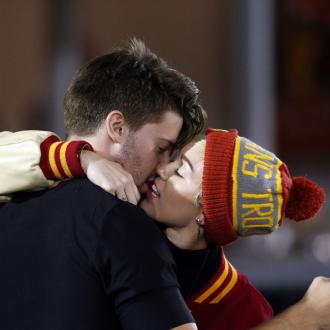 Miley Cyrus reportedly lets her dogs poo inside her house.

The 21-year-old singer isn't bothered that her pet pooches - Emu, Mary Jane, Happy, Penny Lane and Bean - and her little piglet Bubba Sue do their smelly business on the floor of her $4.7 million mansion in Los Angeles, although she does intend to eventually house train them.

A source said: ''It's hard to believe how messy her place is. Miley thinks it's awesome to have six dogs or even more there at once, and don't forget the pig. It's like a true animal house. She's never had to clean up after herself. Her habits are totally out of control.''

However, her new boyfriend Patrick Schwarznegger, 21, is not a fan of the pet plop, especially the overpowering stench, and has reportedly ordered his new beau to get her home cleaned up.

The source explained to Australia's NW magazine: ''He's pretty horrified by the standard of hygiene over at her place. Miley has been trying to make her dogs change their bad habits but it's not something that happens overnight.''

Miley and Patrick - the son of action legend Arnold Schwarzenegger - began dating at the start of November but his mother Maria Shriver allegedly doesn't approve of their relationship.