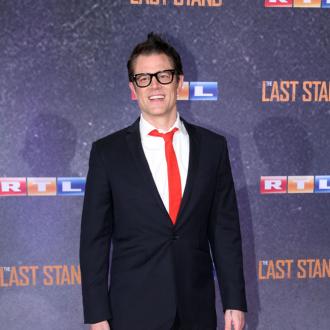 Working with Arnold Schwarzenegger was a ''dream come true'' for Johnny Knoxville.

The 41-year-old actor has admitted he never thought he would get a chance to star in a movie alongside the 65-year-old action hero but thinks he ''drove him crazy'' while filming their new movie 'The Last Stand' because he was so bad at doing his own stunts.

The 'Jackass' star exclusively told BANG Showbiz at the film's UK premiere at the ODEON Leicester Square in London on Tuesday (22.01.13): ''It was a big dream come true, because he's the man, to finally get the chance to do something with him, I never thought that would come along.

''It's really fun doing all the stunts, regular stunt men are all really skilled and talented and then I come on set and I can't do anything, but I'll try anything, I just suck at it.

''In 'Jackass' our stunts are designed to fail, on a movie the stunts have to succeed, and I've honestly trained myself to fail.

''Although when I improved he didn't get angry but I could see I could drive him crazy sometimes.''

Johnny also revealed he was too scared to pull any silly pranks on his co-star.

He said: ''I didn't play any tricks on Arnold, shit no man, the guy can bench press 600 pounds, would you pull pranks on him?''

'The Last Stand' tells the story of a drug cartel boss who busts out of a courthouse and speeds to the Mexican border, where the only thing in his path is a sheriff with inexperienced staff and Arnold admitted he is thrilled to be back on the big screen after taking a long break to focus on his political career.

He said: ''It feels great, I love being back in the movie business and doing acting, and to do action movies and people's enthusiasm for it is great, I'm very happy, its been a great turn out.

''I'm very excited to be here with all these people who have braved the cold, I'm very appreciative and love the British fans ever since I was 20 years old and won my first Mr. Universe title here in London.''