Arnold Schwarzenegger says Miley Cyrus is ''a fantastic person'' and insists he wasn't worried when his son Patrick started dating the singer. 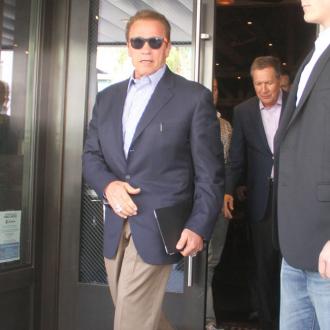 The 'Terminator Genisys' star, whose son Patrick Schwarzenegger split from the 'Wrecking Ball' hitmaker in April after six months of dating, insists he wasn't worried about their relationship and still thinks the 22-year-old singer is ''wonderful'' even though the ''whole thing eventually fell apart.''

Asked if he was concerned when his eldest son starting romancing the high profile beauty, the 67-year-old actor said: ''Under normal circumstances maybe I would be nervous, but I'll tell you the two reasons why not. One is my kids are very strong. They have had their upbringing. They know exactly how far they can go and they should be adventurous, they should venture out and meet different people, so I was not worried about that. The other thing is when I did meet Miley Cyrus, when she came up to Sun Valley skiing during the holidays, I found out that she was a fantastic person.''

He recalled Miley ''went out every day to buy gifts'' for some of the ''little kids'' during the family's holiday in Idaho and often played with them for ''two hours sometimes at a time.''

Arnold also brushed aside rumours he and ex-wife Maria Shriver were worried the 'We Can't Stop' hitmaker, who has a raunchy image, would be a bad influence on their son.

He told Howard Stern on his SiriusXM radio show: ''She has this career side where she has to be a little bit out there and maybe is a little bit different because she grew up in a music family. So what? It didn't bother me. I think Patrick had a wonderful experience, he had a great relationship, and then a whole thing eventually fell apart.''

Patrick recently landed his first acting role in 'Midnight Sun' alongside Bella Thorne and Arnold is ''very proud'' of him for following in his footsteps.

He said: ''I made it very clear to my kids: I don't care if they're a plumber, if they're a writer or if they're a teacher. Whatever they want to do, [I will support them], as long as they're passionate.''