Arnold Schwarzenegger surprised himself by returning to movies as he thought he had left it all behind when he became a politician. 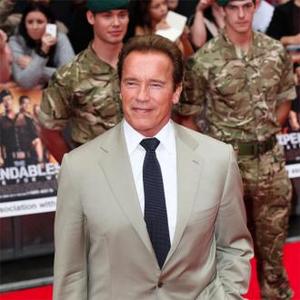 Arnold Schwarzenegger surprised himself by returning to movies.

The former Governor of California thought he would never make another movie after his stint in politics but was shocked when he had ''the greatest time'' on the sets of 'The Expendables' and 'The Expendables 2'.

He told BANG Showbiz: ''When I was governor I would visit movie sets to thank people for shooting in California because it's good for the economy.

''One day Tom Cruise was filming and he was in a harness hanging upside down in a fight scene and I was saying, 'I'm so happy I don't have to hang in this harness upside down doing this fight scene over and over! I'm happy being governor and I can't even imagine doing that again.' And then a few years later after I said that that I'm on the movie set and I'm having the greatest time.''

Arnold believes coming back to work on first 'The Expendables' and then its sequel was perfect because he got to reunite with his fellow action heroes including Sylvester Stallone and Bruce Willis.

He explained: ''I think it was just the ideal movie to come back to, 'The Expendables'.

''First of all because it's got the top action heroes, everyone works together... so it was a safer way to come back and so I was very fortunate, you know, it's like, I did the first one and after that I was asked to come back to do something bigger and I had the best time from the time when we started filming all the way to the end and it was difficult for me to leave because I knew that those guys were going to have fun for a few more months and I'd have to leave to do my next project... so it was a perfect, perfect way to get into the movie business again.''