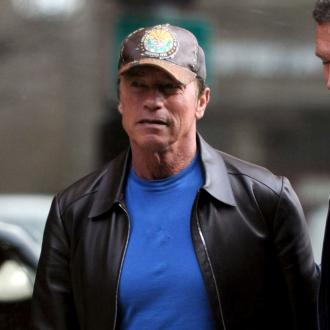 The 67-year-old actor confirmed the title of the upcoming movie in the series, which is currently in production and also stars Emilia Clarke, Matt Smith and Jason Clarke, on his Instagram profile today (06.08.14), and revealed he has officially wrapped shooting his ''rewarding'' scenes for the reboot.

Alongside a photograph of himself sitting in a black director's chair, emblazoned with the name of the Hollywood blockbuster, with his back to the camera, the Austrian-born actor wrote: ''Hasta la vista, baby. I want to thank the cast and crew of @TerminatorGenisys for a fantastic shoot. It was challenging, it was fun, and it was rewarding.''

Arnold can't wait for fans to see the movie, which is being directed by Alan Taylor, when it is released on July 1 2015.

He added: ''From our director to the producers, from the camera team to catering, from visual effects to hair and makeup - we couldn't have done it without you. I can't wait to see our finished project and I know we'll remind the fans why they fell in love with the Terminator. On July 1, 2015, I'll be back.''

It was previously reported that the movie would be called 'Terminator: Genesis.'