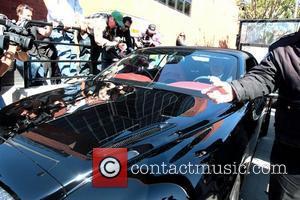 Picture: Arnold Schwarzenegger is seen avoiding the press as he leaves his office Los Angeles, California - 17.05.11

Arnold Schwarzenegger's scheduled animated project 'The Governator' has been cancelled following recent revelations in the Hollywood actor's personal life, reports Tmz.com. Arnold Schwarzenegger had been working on the comic book and animated series with Stan Lee, but the project appears to have been binned.
The character of 'The Governator' was inspired by Arnold's role in the 'Terminator' movies and his time spent as Governor of California. The action-hero was tipped to fight crime with the help of his wife and four children. Following Schwarzenegger's highly-publicised infidelity, a representative for the project said, "In light of recent events, A Squared Entertainment, Pow, Stan Lee Comics, and Archie Comics, have chosen to not go forward with the Governator project". The rep did not specify whether the project was completely dead or just postponed until the media frenzy surrounding Arnold's personal issues had blown over. Earlier this week, Arnold Schwarzenegger admitted to fathering a child with a member of his household staff 10 years ago. The actor also confirmed that he had split from his wife of 25 years, Maria Shriver.
Arnold Schwarzenneger is scheduled to begin filming the forthcoming drama film 'Cry MACho', although it is unclear whether the project will still go ahead.