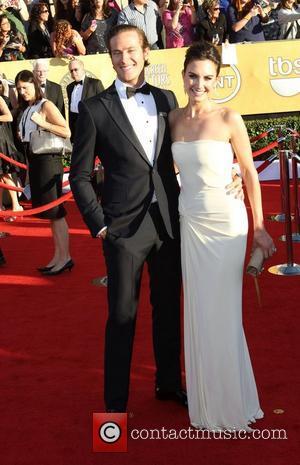 Armie Hammer brought the Lone Ranger teaser trailer with him last night, as he made time in his busy schedule for an appearance on The Tonight Show, reports E! Online.

Looking dapper, sitting alongside Jay Leno in a bespoke grey suit, Hammer, who plays the titular peacekeeper alongside Johnny Depp, spoke of his time on set for the film: "I showed up on set and I said 'ok great we are gonna do the things with the scorpions right' and Gore [the director] was like 'I think we have to rework that.," he laughed, adding: "We were rehearsing with the dummy and the horse bit the dummy's nose off." More importantly, though, a teaser trailer for the new film accompanied his presence, and it didn't disappoint. We saw Western gunslingers, chugging steam trains and of course, the mercurial Depp looking suitably quirky in his Tonto attire. We've also been treated to a moody poster for the film recently, which sees the lone ranger's eyes in a rough depiction of the iconic black eye mask.

Whilst Hammer plays the lead, undoubtedly the film's star is, of course, Depp, who dons a dead bird atop his head, whilst looking habitually cool. The Lone Ranger, also starring Helena Bonham Carter, Tom Wilkinson, Barry Pepper and Ruth Wilson, is due in theatres July 3, 2013.