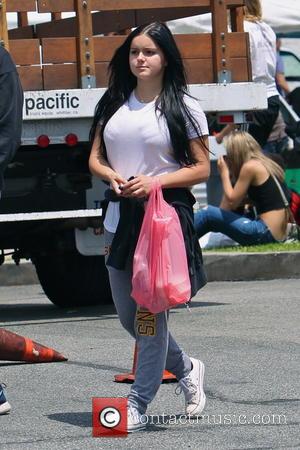 The Modern Family actress admits she has long rued the day she wished for curves after lamenting the fact she was flat-chested as she approached puberty.

She tells America's Glamour magazine, "It really did happen overnight. I remember being in my sister’s wedding and being so flat and thinking, I just wish I would grow boobs! And then overnight I did. But then they kept growing and growing and growing, and it didn’t seem like they were going to stop."

Winter's 32F chest has since garnered her unwanted attention, so she decided to take matters into her own hands and went under the knife on 4 June (15) to reduce her bra size to a 34D.

She explains, "We live in a day and age where everything you do is so ridiculed. As women in the industry, we are totally oversexualised and treated like objects. Every article that has to do with me on a red carpet has to do with ‘Ariel Winter’s Crazy Cleavage!’ or ‘Ariel Winter Shows Huge Boobs at an Event!’ And that’s all people would recognise me by."

The teenager kept the surgery news a secret from everyone except her onscreen mother, Julie Bowen, and she has praised the actress for her love and support.

She says, "I’m excited to finally actually feel confident and not just appear confident. I told (only) Julie Bowen because I had talked to her about my desire to have the surgery. She was really supportive and understanding."

Winter reveals the rest of the Modern Family cast is "really happy" for the star and her new figure, particularly Sofia Vergara, who also struggled with the size of her breasts early in her acting career.

She continues, "I just saw Sofia the other day, and she was like, ‘Oh my God! I love them! They’re great!’"

Winter is planning to debut her new look on the red carpet at the Primetime Emmy Awards in September (15), and she is excited to pick out the perfect dress for her big moment.

She adds, "I’m just excited to try on all the dresses! Now I can wear all styles of dresses and all styles of things. I don’t always have to pick the tightest, most form-fitting dress I can find. I can pick something else and still feel good about myself. I couldn’t do that before. I’m excited to finally actually feel confident and not just appear confident."

Winter has become accustomed to making big decisions for herself after gaining legal emancipation from her mum, Chrystal Workman, in May (15). Mother and daughter have been estranged since 2012, when the actress was removed from her parent's care amid allegations of emotional abuse. She was subsequently placed under the temporary guardianship of her older sister, Shanelle Gray.