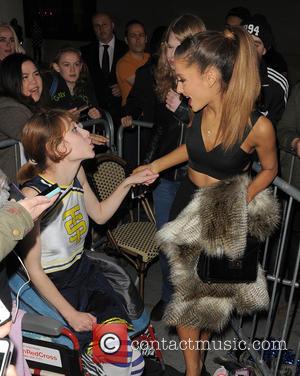 Picture: Ariana Grande - Ariana Grande makes the time to have her picture taken with around 100 fans outside the Radio 1 studios, including a girl...

Pop star Ariana Grande treats her manager Scooter Braun as a stepdad because she "barely" sees her own father.

The Problem hitmaker's parents Joan Grande and Edward Butera split when she was a young child and while her dad stayed in the family's home town in Florida, Grande and her mother relocated to Beverly Hills when her singing career took off.

Grande admits she now sadly sees very little of her dad due to her hectic schedule, so she relies on Braun, who also launched Justin Bieber's career, to mentor her since he signed her up last year (13).

Speaking to Britain's Daily Telegraph newspaper, she says, "(Braun)'s like a stepdad. I barely see (my father), but when I do it's very pleasant. I love my dad. That was very hard as a young girl when my parents got divorced. Being in the middle of it was so stressful. And of course being made up of both of them - I was like, 'Hey, if they both dislike each other's attributes so much, what am I to like about me? I'm made from these two people and I'm caught in the middle of all this fighting.' It was traumatic."