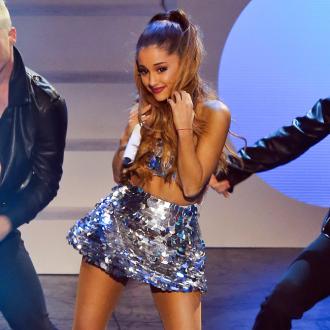 The 'Problem' hitmaker flew to the resort in Orlando, Florida with a small number of close friends and family members to enjoy a few days off before her special milestone birthday on Thursday (26.06.14).

The star, who grew up in Boca Raton near Miami, shared pictures of herself wearing Minnie Mouse ears, and posing next to Mickey Mouse, Prince Charming and several other Disney characters in front of Cinderella's castle on Twitter.

The brunette beauty was also presented with a massive four-tiered blue birthday cake, and she tweeted: ''Spending my last few days as a non 21 year old in one of my favourite childhood places with my favourite people. Having the best birthday trip.''

Shortly before arriving at the resort, she posted: ''Birthday trip with a big group of friends & loved ones..... never been so excited.''

The brunette beauty is also planning to have another huge party on Thursday and hinted she is very excited to continue her celebrations.

The singer previously insisted her break-up from the former The Wanted star was amicable.

She said: ''I am so glad to have met him and have a friend like him in my life. He's an amazing person. It was very civil. It was mutual.''