Ariana Grande Enraged A U.k. Tv Host By Failing To Arrive For A Scheduled Appearance On His Chat Show. 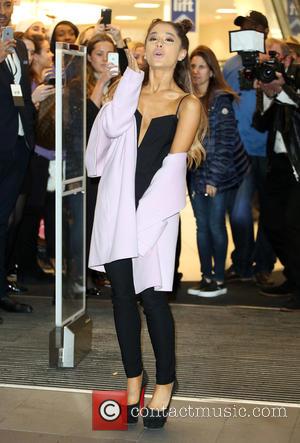 The Problem singer had been due to take part in a recording of Britain's The Jonathan Ross Show on Wednesday (04Nov15), but the host claims that despite assurances she was en route to the studio, Ariana never showed up.

In a foul-mouthed rant which will be cut from broadcast when the show airs in the U.K. on Saturday (07Nov15), TV presenter Jonathan branded the U.S. singer "lazy" and suggested she had skipped the commitment to enjoy a fast-food dinner.

"Ariana is in town. We were told she would be in the car at 6pm to be here for 7pm then it got to 7pm and she was not in the car - 7.30pm and she is still not in the motherf**king car. So I don't think we can hold out much hope," Jonathan fumed.

"I don't know what it is. We are going to give Ariana the benefit of the doubt and not say anything mean or judgmental. I apologise to anyone who might have come along hoping to see her.

"She was booked but the lazy little f**ker has not come. Maybe she has gone to her first (fast-food joint) Nando's."

Instead of closing his show with a performance from the singer, the presenter and his guests, acting stars Joan Collins, Danny DeVito and Sheridan Smith, improvised with a karaoke rendition of Dolly Parton's hit Nine to Five.

A spokesperson for the programme's broadcaster, ITV, praised the other guests who did make it to the recording for keeping the taping on track despite Ariana's no show.

"Unfortunately Ariana didn't make the recording of the show. Regardless, our other guests Joan Collins, Sheridan Smith and Danny DeVito made for a great show," the rep said.