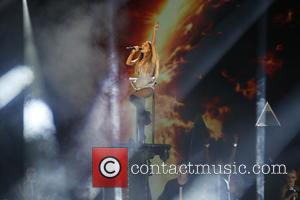 Pop star Ariana Grande and actress Uma Thurman were among the honourees at the 66th annual Bambi Awards in Berlin, Germany on Thursday night (13Nov14).

Rockers U2 were also at Berlin's Stage Theatre to receive the Best International Music accolade, while tenor Jonas Kaufmann and pianist Lang Lang were recognised for their outstanding achievements in classical music.

Beloved German singer Helene Fischer was feted with her second consecutive Bambi award, while The Danish Crown Princess was honoured for her philanthropic efforts against domestic violence.