Former Nickelodeon actress Ariana Grande has landed her very first number one alongside Iggy Azalea with her collaborative new tune 'Problem'. And not only that, she's even made history by becoming the first chart topper to also succeed in having the most streams in accordance to the reformed Official Singles Chart. It presents high hopes for her forthcoming second album 'My Everything' due out later this summer - but goodness knows why. 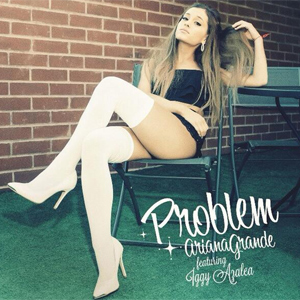 'Problem' opens with a quirky, celebratory trumpet and Iggy Azalea outlining her hip hop influence with her brief introduction. Ariana then breaks in with an impressively bland, generic pop verse, frequenting such unusually sung lines as 'baby' and 'I want you'. You have to hand it to her, her voice does reach some unbelievable heights throughout, but in a song so void of feeling and originality, it seems so wasted.

As the chorus approaches, you've got the attempt at sexiness with the whispered 'I got one less problem without ya' which just feels painfully cheesy. Iggy's entrance hardly feels like an improvement either, with her highly predictable spin on Jay-Z's '99 Problems': 'I got 99 problems but you won't be one' - seriously?! It's true Iggy can spit with epic speed, but she's hardly going to change hip hop.

Sure, 'Problem' is a catchy tune, but then repeating the same line over and over again ('One less, one less problem') is clearly going to stick in the listener's head - unfortunately, not in a good way. The only attention grabbers of the track are the minimally backed, elevating bridges which display Ariana's voice beautifully, and the scattered trumpet between verses which adds a funky, regrettably brief, Motown feel.

'Problem' is an upbeat pop anthem designed purely for dancing (and making money) with it's heavily recycled disco beat and unimaginative lyrics. Ariana Grande is not your usual Nickelodeon-to-popstar story in that, well, she can actually sing really well, but I just can't shake the feeling that I've heard this track with several different names about a million times before.