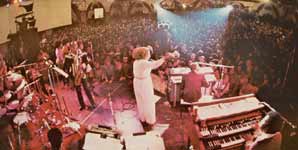 Rhino Records will be releasing two legendary live at Fillmore West albums recorded in 1971 by Aretha Franklin and King Curtis as remastered and expanded deluxe reissues.

On March 5-7, 1971, the Queen of Soul headlined Bill Graham's world-famous venue. Backed by the supercharged rhythm section of King Curtis And The Kingpins, Aretha is in peak form on a diverse set of classic songs, including "Respect," "Dr. Feelgood," "Bridge Over Troubled Water," and more.

Aretha Franklin - Rolling In The...

Aretha Franklin - I Knew You...