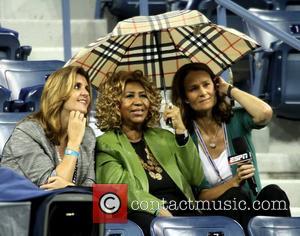 R&B legend Aretha Franklin has opened up about her mystery health crisis of 2010, revealing a tumour landed her in hospital.
The Respect singer has refused to divulge details of the illness that forced her to axe a series of concerts in 2010, although she has denied widespread media reports she was suffering from pancreatic cancer.
It subsequently emerged Franklin had also undergone surgery, but the private star only spoke out to deny rumours that the procedure was a gastric bypass.
Now the Queen of Soul has told CNN anchor Soledad O'Brien she needed the operation after doctors discovered a tumour, although she did not specify where on her body the growth was found.
Franklin made the admission while discussing the hat she wore at U.S. President Barack Obama's inauguration in 2009, telling the broadcaster, "The hat was notorious, wasn't it? The infamous hat, I love it! The hat had a whole thing of its own.
"The hat was on its way to the Smithsonian (Institution) and that's when I found out I had to have surgery. Well, I had a tumour and that was taken care of. It's behind me and thank God it's behind me."
Franklin also admitted she's still fighting to get healthy after losing 85 pounds (38.5 kilograms) of body fat and piling some of the weight back on.
She adds, "I put 15 or 20 of those pounds back on and I'm working to get them back off. It's an up and down thing."