Arctic Monkeys - When The Sun Goes Down Video 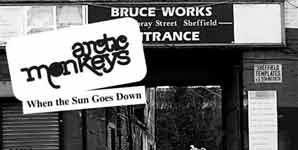 Artist: Arctic Monkeys
Song title: When The Sun Goes Down

Arctic Monkeys
When The Sun Goes Down
January 16, 2006

When The Sun Goes Down............. As it blew up last time more than I, the infamous Mr G Bennet could have anticipated, ya get to expecting the follow up. More of the same, repeat the formula and revert to type, cement the position, shift the units and convert the Donny Osmond lovers. So the cd goes in and i'm ready for catchy ditty Mk II, about girls in clubs and the like and I get this. .....

A different beast for sure. I'm uncomfortable in my seat. It's a singalong without a shadow of a doubt, but "I wonder what went wrong so that she had to roam the streets". Hardly the friggin' Macarena is it mate? So the mind starts to wander n think about the scene that's portrayed. Gordon concludes by thinking this is the obvious next point. Cos' life isn't all girls in nightclubs and joyful flirty shouting over Rachel Stevens's new tune. This is the flip side of the coin for the ones that got left behind somewhere in shitsville. This is reality of a different kind. I get to thinking that the method behind it wasn't some calculated attempt to break a new target audience but to say something.

That something's in my head as I write this down. The lyrics say more in three minutes about where I live, then any social statistics on the demographic from Tony and his mates could ever tell ya.

But the song. The faces of the people who know the words already are etched in my head. I wonder if the connections made between the sweaty hordes singing it out loud down the front and the girl who's probably still there, waiting for her next punter. When Mr radio man spins the disc she'll be the star. From the backstreets to the radio this time for her.

But the line of continuity stills runs true. It's still Arctic Monkeys and it could only ever be them. It just makes me smile that they didn't sit in a room and decide to put an Aaaaaaaahhhhhhh in the chorus cos' that's what worked last time. A step on you see? Like a kid aged 6. Last time they were two. You follow? The result is my favourite of them all. Because doing what was easiest or most obvious never seemed to be what Arctic Monkeys were about to those that have bestowed their faith in them.

The same way that a man of integrity couldn't sell you a clapped out cut n shut Cortina knowing the exhausts about as reliable as a Gareth Southgate penalty, So I doubt Arctic Monkeys could churn out a song without it being the truth. The result is a song that stays in the mind not only so that you can join the sweaty Betty's at the gigs in mass singalong but in other ways and that has to better than any mid week chart position.